A Dynamic Nuclear Polarisation (DNP) Polariser for Nuclear Magnetic Resonance (NMR) has been recently installed at IBEC, coordinator of BLOC project, being the only one in operation in Spain, and among the few ones existing in Europe. This equipment can improve up to 10000 folds the signal compared to a conventional NMR procedure and allows for the study of cellular metabolism in real time. 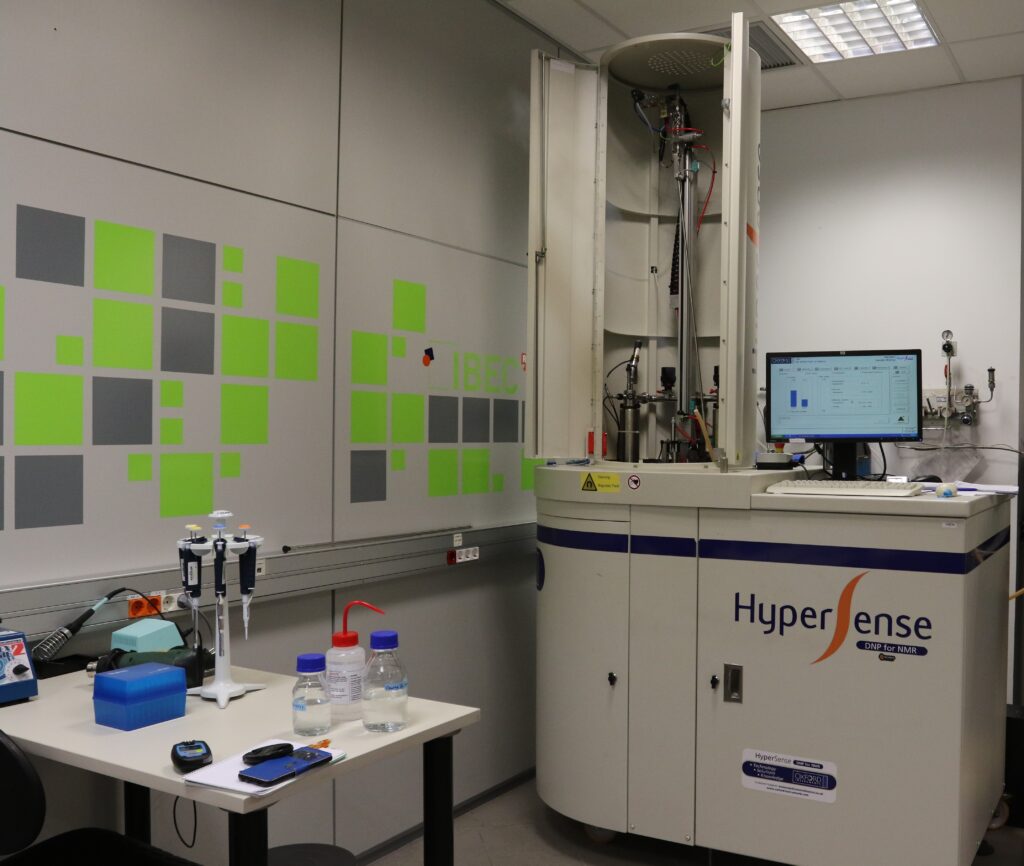 The HyperSense™ equipment, from Oxford Instruments Molecular Biotools, has been recently installed in the Institute for Bioengineering of Catalonia (IBEC), at the Molecular Imaging for Precision Medicine laboratory (MIPMED) led by the coordinator of BLOC project, Irene Marco, following a cession agreement made with the University of Barcelona (UB).  This in vitro polarizer can provide a signal-to-noise ratio not reachable by conventional NMR equipment, increasing sensitivity by more than 10,000 fold. As a result, this technique can be used to study rapid metabolic processes either in vivo or in vitro, in a non-invasive way and in real time, providing information on the mechanistic and biochemical changes that occur in a diseased organ, for example. This powerful technique can open new areas of research and will probably change the field of NMR.

The European Project BLOC will strongly benefit from this recently installed equipment, as this forefront technology is crucial to fulfill its main objective: to develop a benchtop spectrometer based on magnetic resonance spectroscopy and imaging using dynamic nuclear polarisation (DNP-MR) to monitor metabolic diseases such as diabetes and non-alcoholic fatty liver disease (NAFLD) and evaluate responses to different stimulus.

The equipment installed at IBEC performs dynamic nuclear polarisation of samples in the fluid-form, for example sugars, that are afterwards used to monitor cellular metabolism on a conventional NMR equipment. The sample is transferred to the center of the HyperSense™, where it is submerged in liquid helium at the core of the magnetic field. Everything is done under an extremely low temperature, -271,75 ºC, which allows the sample carbon atoms to be nearly fully polarised.

BLOC researchers use hyperpolarised pyruvic acid, a sugar that is then used to study the metabolism of different cellular types. Inside the NMR, the cells are supplied with this sample and, for about 75 seconds, researchers can follow up its absorption by the cells and all the metabolic steps that use this sugar as energy source. This short time is sufficient to see several enzymatic reactions and transient metabolic reaction intermediates. In other words, this remarkable boost allows researchers to see molecular processes of different biological systems in real time, in situ, and in a non-invasive way, in just few minutes. Moreover, as it is a very fast procedure, problems such as temperature and oxygen changes, cell death and cellular alterations during the experiment are avoided, allowing researchers to reliably compare results among different experiments.

The hyperpolarised magnetic resonance technique allows us to observe in a couple of minutes what we could only see in hours with a conventional NMR, and moreover with a sensitivity that can be up to 10000 times higher.

The time-lapse video below shows the entire installation process of the HyperSense™ equipment, which took three days and counted with the participation of various skilled technicians.